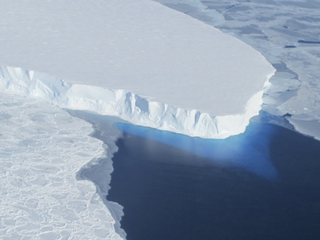 US and British scientific agencies announced their biggest joint Antarctic research effort in more than a generation on Monday.

The focus is Thwaites Glacier, which is roughly the size of Florida and sits on the western edge of Antarctica.

Ice melting on Thwaites accounts for 4 percent of global sea level rise, an amount that’s nearly doubled since the 1990s. Scientists in the new five-year research collaboration hope to determine how much more, and how fast, the glacier will melt as the world continues to warm.

Today, projections for sea level rise vary widely, from about a foot of sea level rise to six feet by century’s end. Some of that uncertainty is tied to questions regarding how Antarctica, and specifically the West Antarctic Ice Sheet (home to Thwaites) will react to warmer air and water temperatures.

Computer modeling shows Thwaites is unstable, and could start collapsing within decades.

“What we’re trying to do is work out which of those equally plausible versions of the model is correct."

The UK Natural Environment Research Council and the US National Science Foundation is organizing the effort, which involves about 100 scientists from seven different countries and has been years in the making.

“Really the whole program is about understanding that extra uncertainty attached to sea level rise and doing what we can to remove it, allowing people to protect their coastal environments and to prepare property to protect their populations,” said David Vaughan, director of Science at British Antarctic Survey, at a press conference announcing the research in Cambridge, England on Monday.

The first scientist set foot on Thwaites back in the 1950s, but only a few dozen researchers have been back since. That’s partly because Thwaites sits roughly 1,000 miles away from the nearest permanent research station, and the weather conditions are particularly bracing.

“Logistics make this science extremely difficult,” says David Holland from New York University, Nicholls’ collaborator and one of the researchers who has previously worked on Thwaites. “The window of opportunity to do research is small, basically December to January. Before that it's too cold, after that it's too cold.”

Eight teams in total will research the glacier itself, the Antarctic climate surrounding it, and the water underneath it and at its edge. One team will sample the bedrock beneath the ice sheet for clues as to whether the glacier has retreated in the past, and if so, how it recovered. Radar and seismic analysis will examine what controls Thwaites’ width and speed.

Another research project, co-led by Erin Pettit from the University of Alaska Fairbanks, will look at how both the ocean below the glacier and the atmosphere above it are affecting the ice.

Glaciers can destabilize when meltwater on the surface cause fractures that deepen over time. But they can also be eaten away by warming ocean waters circulating underneath. Researchers have recently discovered that's starting to happen in Antarctica.

“[Thwaites], we think is being affected more by what's happening on the underside, so the heat that's being brought in from the ocean, from the circumpolar deep water,” Pettit said.

Pettit’s team will use hot-water drills to insert sensors into the glacier, and deploy unmanned subs — including the now-famous Boaty McBoatface — to measure ocean temperatures underneath the glacier.

They’re even attaching sensors to seals expand their view of conditions in the Amundsen Sea.

“[Seals] dive up and down and around, and they go all over the place, they basically can provide this spatial and temporal picture of what the ocean properties are,” Pettit said.

The logistics of the research will be complex, even by Antarctic standards. Some researchers will fly from British and American research bases. Once on site at their research locations, they'll set up camp for weeks at a time in tents on the ice. Others will reach the glacier’s face on ice-breakers.

The research effort should give scientists insight into the future of not just Thwaites, but a larger piece of Antarctica.

"Thwaites is the 800-pound gorilla, just because of how big and wide and deep into West Antarctica this particular outlet glacier goes,” says Chris Shuman, a University of Maryland Baltimore County professor working at the NASA's Goddard Space Flight Center and who is unaffiliated with the project. “So understanding it will greatly improve our ability to understand the response of the entire West Antarctic Ice Sheet."

If the whole West Antarctic Ice Sheet were to collapse, that could raise sea levels by up to 13 feet.

The new research represents a large investment by US and UK polar research groups, and signals how important they believe the fate of Thwaites will be to millions of coastal residents of both countries.