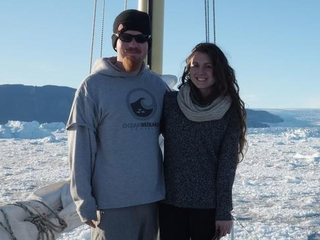 Matt Rutherford and Nicole Trenholm weren’t going to let bad news about a grant for this year’s arctic marine expedition stop them. So they hitched a ride. Friends with boats, right?  “The deal is they will take us into Greenland waters for our research in exchange for me helping them navigate the toughest sections of the Northwest Passage,” Rutherford said. He met the owners of the boat while delivering a boat from Panama to San Diego a few years back.  The couple, who make up the Ocean Research Project using the small platform of a sailboat to perform marine research delving into man’s effect on the world’s oceans, was determined to get back into the Arctic for follow up research from their 2016 mission to northern Greenland.  And they were buoyed after co-publishing a paper with NASA scientists and the Oceans Melting Greenland (OMG) project, published by Oceanography magazine in June, based on their research into ocean temperatures affecting Greenland glacier melt.  And further boosted by the donation of a 65-foot steel-hulled Bruce Roberts sailboat to their cause. It needs some sprucing up, but should prove to be a vessel for the long haul.  They took off from their home base in Annapolis July 23, flying to Reykjavik, Iceland, then to Greenland.  The scientist half of the operation is Trenholm while Rutherford, famous for his 2012 single-handed nonstop voyage around the Americas — the first to ever accomplish the sailing feat — is the captain and spark plug.  Trenholm, who also has a blog and teaching arrangement with Anne Arundel County Public Schools STEM program, posted some details after they made it to Aasiaat, Greenland, a small village about a third of the way up the icy coast.  They boarded Toboggan, the boat they hitched a ride on, and took off up Disko Bay to record water temperatures approaching Jakobshavn Glacier, known to calf off chunks of ice the size of New York City.  “With our CTD instrument, which measures conductivity, temperature and depth, we indeed found that warm water,” Trenholm wrote.  From there they moved north to Upernavik to check ice charts and gear up to cross Baffin Bay into the Northwest Passage, a three-day sail.  By Friday night they were just off Devon Island, the largest uninhabited island on earth, at the eastern end of the passage.

They plan to conduct more research.