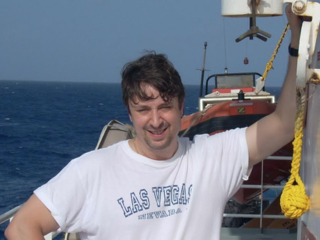 Let us know if you are coming at this link.
55 years ago last month, U.S. President John F. Kennedy was assassinated while riding in an open motorcade by a sniper in Dallas, Texas on 22 November 1963.  A civilian bystander, Mr. Abraham Zapruder, filmed the motorcade with a 8-mm home movie camera as it drove through Dealey Plaza, inadvertently recording an ≈8 second sequence of events that included a fatal gunshot wound to the President in the head.  The accompanying backward motion of the President's head after impact appeared to support later “conspiracy theories” because it was claimed that this was proof of a shot from the front (in addition to one from behind). In this presentation, simple one-dimensional dynamical models are uniquely applied to study in detail the fatal shot and the motion of the President's head observed in the film.  Using known parameters from the crime scene, explicit force calculations are carried out for determining the projectile's retardation during tissue passage along with the resulting transfer of momentum and kinetic energy (KE). The computed instantaneous KE transfer within the soft tissue is found to be consistent with the formation of a temporary cavity associated with the observed explosion of the head, and subsequent quantitative examination of this phenomenon reveals two delayed forces at play in the backward motion of the President following impact.  It is therefore found that the observed motions of President Kennedy in the film are physically consistent with a high-speed projectile impact from the rear of the motorcade, these resulting from an instantaneous forward impulse force, followed by delayed rearward recoil and neuromuscular forces.