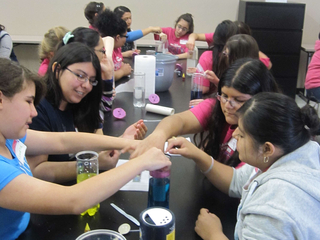 JCET’s Valerie Casasanto and Ana Prados led theBeautiful EarthScience, Technology, Engineering and Math (STEM) education program for more than 100 local female middle and high school students, their parents and teachers in Laredo, Texas on March 30th. The event was hosted at the Texas A&M International University (TAMIU) and co-hosted by the Office of Congressman Henry Cuellar and was part of a week-long fair to encourage Hispanic and female students to go into STEM careers.

Students watched the Bella Gaia multimedia program in the planetarium dome, participated in a science talk by Ana Prados, and performed hands-on experiments related to NASA Earth Science missions and themes. Dr. Prados led a hands-on workshop for teachers in the afternoon to learn about accessing NASA Earth Science data and other NASA education tools.  During the week, other groups of approximately 200 students participated in a career fair and heard from special guest speaker Michael E. Fossum, a NASA astronaut.