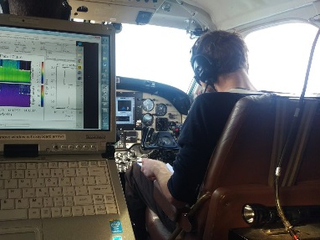 On November 16, Brian Carroll and Christiana Sasser, mechanical engineering, rose at 3:45 a.m. to drive to Lancaster, PA. After a briefing, they, a student from Millersville University, a pilot, and a technician took to the skies in a research airplane. Carroll, a student in the atmospheric physics Ph.D. program, had used detailed weather forecasting to meticulously plan the route to track a cold front passing through the area. Onboard instruments would collect data about how it affected the local air mass all along the way.
The plane chased the cold front across Atlantic City, NJ and then out over the ocean. But weather can be fickle, even with the best-laid plans.
“We never caught the cold front,” recalls Carroll. “We had to decide in the moment how we were going to salvage this and make it a decent research flight.” They did—the group instead focused their data collection on exploring differences in the planetary boundary layer (PBL) over water, the coastline, and farther inland. The PBL is the lowest layer of the atmosphere and can be anywhere from several hundred to 2,000 meters from Earth’s surface.
Carroll and Sasser’s flight was one of 14 student-led flights that occurred as part of a two-week, NSF-funded educational program led by Millersville University with UMBC, Penn State University, and Rutgers University as research partners and the University of Wyoming King Air aircraft and crew as hired support. Far from being a disaster, their flight met the initiative’s goal to provide experiential learning opportunities. It showed the group “how the science gets done in real life,” Carroll says. “It’s not an idealized problem of ‘Here’s this wonderful data set, you need to get something out of it.’ We needed to improvise with what was going on while we were in the air, and we now know about a lot of very real, small issues that we wouldn’t know about otherwise.”
The third UMBC student participant, atmospheric physics graduate student Zhifeng Yang, participated in a second UMBC-led flight with Carroll on November 11.  Belay Demoz, director of UMBC’s Joint Center for Earth Systems Technology and professor of physics, and Zhibo Zhang, associate professor of physics, supported the students.
In all, 175 students participated in the program, which was intended to serve as a springboard for students’ research projects while giving them hands-on experience with the instruments and process required for in-flight data collection. The resulting data cache was immense: Instruments on the aircraft measured a few dozen variables every second for 40 total flight hours, in addition to data collected by 50 weather balloons and two ground stations. The instruments included two Light Detection and Ranging (LiDAR) systems (one pointing skyward and one toward Earth), sensors to detect gases such as methane and carbon dioxide, and tools to measure temperature, humidity, wind speed, and more.
Demoz, who encouraged his students to get involved with the project, would like to see a similar flight series happen in the future, closer to UMBC. “He’s always pushing students to get as much professional experience as they can,” says Carroll.  Carroll didn’t need the nudge, because “it’s possibly a once-in-a-lifetime experience. Even though aircraft are used often, it’s not often oriented in this give-everybody-a-turn sort of way.” Yang agrees. “It’s a very rare opportunity for us to observe the data in flight,” he says, “and now we know how to use a lot of the instruments that we didn’t know before.”
Carroll will use a similar type of aircraft to collect data for his doctoral research, “so knowing their capabilities and how to deal with them is definitely going to be valuable,” he says. Yang’s research seeks to improve weather forecasting models, so “we need observational data to evaluate the model, so we can adjust it to get better simulation results,” he says.
Both of them, however, have goals that go deeper than collecting, analyzing, and modeling data. “After I got introduced to this field, and when I realized that this work is very important for human health,” Yang says, “I wanted to do something to make this field better and better.” As for Carroll, “My long-term goals are to save the world and go into space,” he says. “If I enjoy doing math and science, which I do, then it’s good for me to put those skills to use toward helping the greater good and preserving the planet.”
0 Comments (requires login)