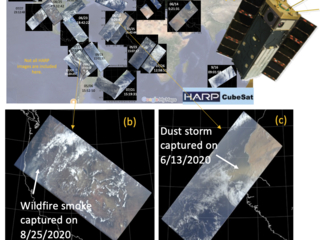 Dr. Xiaoguang, an Assistant Research Scientist with JCET, and his co-investigators (Prof. Vanderlei Martins and graduate students Anin Puthukkudy and Noah Sienkiewicz) are awarded a $25,000 grant from UMBC Strategic Awards for Research Transitions (START) program to study atmospheric aerosols from UMBC's HARP CubeSat. HARP, short for Hyper-Agular Rainbow Polarimeter (HARP), a small satellite built by Dr. Martins's team at UMBC Earth and Space Institute, was deployed from the International Space Station on the 19th of February 2020 and has been orbiting our planet since. With the START grant, the team will perform an in-depth analysis of the performance of HARP instrument in space and will decode the amount and type of atmospheric aerosol particles (such as biomass burning smoke and mineral dust) from HARP captured imagery. The outcomes of this project will provide a science demonstration in multi-angular polarimetric aerosol remote sensing that are increasingly advocated by the broad scientific community, and thus advance future applications of current and future UMBC HARP sensors.

Figure caption: (a) Gallery of HARP captured images in 2020 across the globe. Highlighted in panels (b) and (c) are scenes for wildfire smoke plumes over the Western U.S. and Saharan dust storm plums over northern Atlantic, respectively.