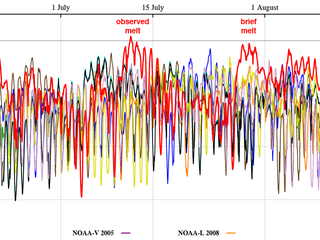 Here, 1 hour average temperature observations are plotted for the period 1 June through 31 August for 2005-2012.  The hourly average air temperature exceeds zero Celsius on 11 July for several hours and almost reaches zero on 12 July.  On 10 July and 13-14 July, the hourly air temperature peaks suggest that the surface would very likely have been briefly melting.  All five days have peaks well in excess of the NOAA temperature data observed in previous years.  A lesser event happened during 28-30 July with a period of brief melting occurring on the 29th.