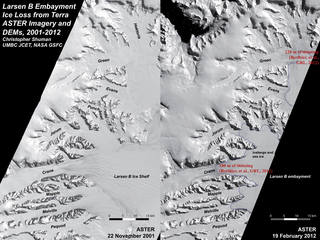 Portions of two NASA Terra ASTER swaths, one before and one a decade after the collapse of the Larsen B ice shelf (early 2002) illustrate dramatic changes in ice area and glacier thickness. The ice edge position in early 2012 is indicated by the thin blue line that now extends well into each tributary of what was the Larsen B ice shelf. In a decade, nearly 5000 km2 (~1900 mi2) of ice has been lost along this part of the Antarctic Peninsula. Ice thickness changes totaling up to 220 m (~720 ft.) have been documented by DEM differencing (digital elevation models, e.g. Berthier et al., 2012, GRL) but can also be clearly seen by comparing bedrock outcrops in the lower Hektoria and other glaciers. Please click here for larger image.