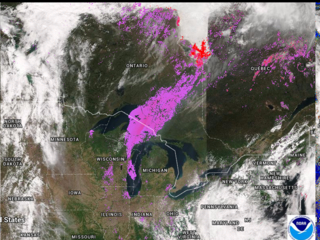 When Jill Engel-Cox Ph.D. ’04, marine-estuarine environmental sciences, started the Smog Blog in 2003, it served as “kind of an online lab notebook,” she says. In the early 2000s, there were plenty of sources of air quality data, “but no one was putting these disparate data sources all together on a daily basis.” Enter the Smog Blog.

As Engel-Cox developed the site, she and advisor Ray Hoff, now-emeritus professor of physics at UMBC, expanded it to include other students. “The Smog Blog turned into a great way for students to learn how to analyze satellite and other air quality data quickly, as well as how to write scientific information clearly for a wide audience,” Engel-Cox says.

But the Smog Blog was destined for bigger things. “It took on a life of its own,” says Ruben Delgado, assistant research scientist at the Joint Center for Earth Systems Technology. From comments on the site, “we discovered we had a wide variety of readers,” says Engel-Cox, “including atmospheric scientists, state environmental regulators, and even an amateur astronomer who used the Smog Blog to better predict clear skies.”

Four years ago, Delgado realized the Smog Blog had more than five million total hits per year. Now it gets 16,000 unique hits per month. Many visitors, such as weather agencies or citizens sensitive to air pollution, visit several times per day.

A team of students posts to the Smog Blog six days per week to keep readers updated. Now it’s a self-perpetuating venture: as students graduate, they train the next cohort of Smog Bloggers how to interpret data from satellites and explain it in layman’s terms on the blog.

Delgado has received external offers to buy the Smog Blog, but he’s not interested in commercializing it. He says it’s “by students, for students,” and should stay that way. Even as a university project, however, there are many possibilities for the Smog Blog’s future, including growth through collaborations. The blog even emerged in a discussion with Robert Marshall ‘88, founder and CEO of Earth Networks, on compelling uses for weather data following Marshall’s keynote at a UMBC research conference on climate issues.

Next on the horizon for the Smog Blog is a new home: a freshly designed website expected to launch by the end of the summer. Students will also be working over the summer to develop a Smog Blog mobile app.

In the meantime, as spring pollen, summer wildfires, winter inversions, and other air quality issues continue, the blog expects traffic to keep rising as it serves up critical information to a diverse audience, all while supporting the research and education of UMBC students.