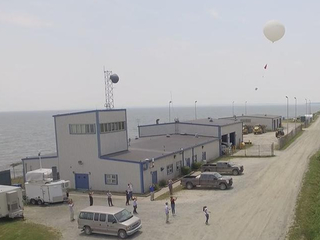 The sky above Hart-Miller Island became a busy laboratory for several weeks this summer as researchers launched balloons, drones and planes to better understand the complex swirl of air pollution over the Chesapeake Bay.  State and federal agencies initiated a research study aimed at providing more detailed data on how and why the Chesapeake Bay seems to act as a magnet for ozone pollution, amplifying the smog before it is then blown back over land.  “The study is an exciting example of cutting-edge research on the interface between land and water,” said Maryland Environment Secretary Ben Grumbles.  The study attempts to understand in a three-dimensional way what happens to the emissions of power plants, cars and other pollutants once they gather over the Chesapeake Bay. The results could help Maryland make the case for forcing sources of air pollution in states upwind to better control their emissions.  Maryland officials blame air pollution from upwind states for more than two-thirds of the smog that forms over the Baltimore and Washington regions. On hot summer days, the sunlight and heat trigger chemical reactions between pollutants and other compounds in the air, multiplying what is known as ground-level ozone.  Ozone is a form of oxygen found naturally in the upper atmosphere that protects the Earth from ultraviolet radiation, but ground-level ozone is a key ingredient in smog and can cause or aggravate breathing or heart problems in humans.  Already this year there have been eight days when Baltimore’s air quality exceeded U.S. Environmental Protection Agency standards.  Ozone is created by the chemical reactions between pollutants known as nitrogen oxides and volatile organic compounds. Nitrogen oxides come from the combustion of fossil fuels in cars and power plants. The nitrogen often falls out of the air as ozone is created.  About a third of the bay’s nitrogen pollution falls from the air onto the land and water, said Ariel Solaski, a staff litigation attorney at the Chesapeake Bay Foundation. Excess nitrogen in the bay contributes to algae blooms and dead zones.  Significant improvements in the bay’s water quality have been seen since nutrients including nitrogen have been reduced in the rivers and streams flowing into the bay.
Article by Liz Bowie - Contact Reporter for Baltimore Sun
0 Comments (requires login)