Dry Ice: How Expanding Antarctic Sea Ice is drying the atmosphere over the Southern Ocean 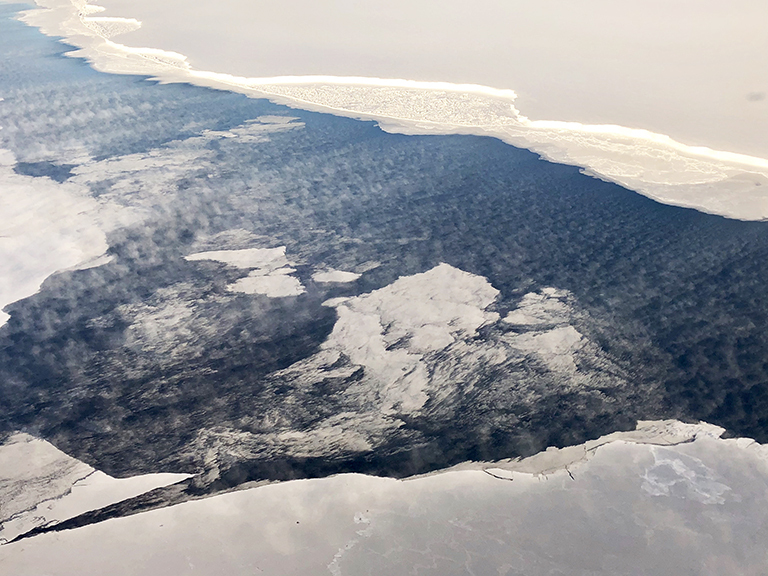 In this photo taken during a NASA Ice-Bridge science flight off of the coast of Antarctica in fall of 2018, dry and cold winds blowing off the ice shelf over an opening in the sea ice (top of figure) cause evaporation from the ocean surface into the atmosphere, where low clouds form. Credit: Linette Boisvert

It may seem counterintuitive that Earth’s coldest, iciest places are actually some of the driest places on our planet. But Earth’s polar regions see significantly less evaporation – the conversion of liquid water on Earth’s surface into gaseous water vapor in our atmosphere -- than other parts of our world, largely due to the presence of sea ice. New NASA research using a sophisticated satellite instrument shows the Southern Ocean surrounding Antarctica has been evaporating less water to the atmosphere, with potential impacts on global ocean circulation and Earth’s climate.

Evaporation is a key part of the global water cycle, the process by which water circulates continuously between Earth’s surface (land and ocean) and the atmosphere. As the Sun heats up water from lakes, rivers and the ocean, the resulting water vapor condenses to form clouds and then returns to the surface as precipitation as rain and snow. About 85 percent of atmospheric water vapor evaporates from the surface of Earth’s ocean; with tropical regions having the highest levels of evaporation, due to their warm temperatures and close proximity to the ocean. Evaporation plays a key role in weather and climate. Less evaporation means less water vapor in the air, which can change precipitation patterns around the globe.

The presence of sea ice completely changes the dynamics of evaporation, however. This layer of frozen ocean water covers much of the Arctic Ocean and Southern Ocean, with the extent and thickness changing seasonally due to temperatures. “You can think of sea ice as a blanket that covers the ocean, similar to when people put covers over their swimming pools to keep evaporation down,” said Eric Fetzer, project scientist for NASA’s Atmospheric Infrared Sounder (AIRS) instrument on NASA’s Aqua satellite. “So, when there’s a lot of sea ice, you just don’t get much evaporation.”

“The reason why we care about changing sea ice conditions in this region is because sea ice prohibits the interaction between the ocean and the atmosphere,” said Linette Boisvert, a research scientist at NASA’s Goddard Space Flight Center. “That can affect the water cycle, clouds, and precipitation patterns across the globe.”

Boisvert first became interested in the connection between sea ice and evaporation while working on her doctorate, when she used AIRS data to measure evaporation in the Arctic Ocean and the Greenland Ice Sheet. Inspired by this previous work, she decided to do a similar study in Antarctica. “We wanted to see if we could use AIRS to estimate evaporation from the Southern Ocean and Antarctic sea ice surfaces, using the same method and same data we’d used in the other studies,” she said.

Data from satellite instruments are extremely valuable in Antarctica, due to the region’s lack of ground observation data. “There just aren’t a lot of observations in the Southern Ocean, because it’s hard to get ships down there to take measurements,” said Boisvert.